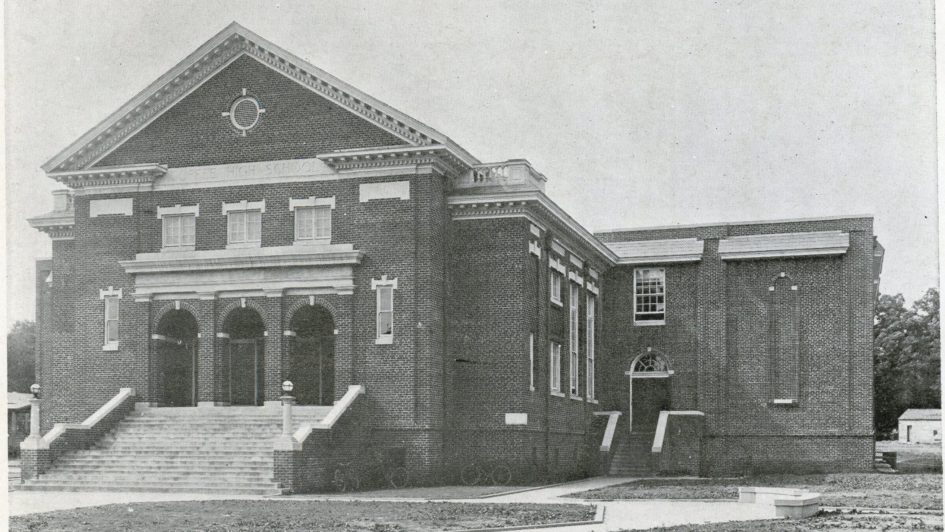 Growth and expansion of education opportunities mark the first half of the new century on many levels with new buildings and programs. March 28, 1921 – Gilbert Elementary School – The new Gilbert Elementary School building in North Florence is completed. A six weeks’ inaugural session is held in the building that spring, combining “nearly 500 pupils” of the Fifth Ward School at North Florence taught by Miss Josie Milner and the elementary school formed around the Coffee High School, of which Miss Verta Jones is supervisor. Rev. IT Carlton of North Wood Avenue Methodist Church is acting principal of this initial spring term. The building was named for former Superintendent H. C. Gilbert. Photo taken of a drawing at the Florence/Lauderdale Public Library

1930 – Southern Library – Soon after the completion of Bob Graves Hall, the administration building for the University of North Alabama, the Southern Library moved into a room located on the second floor of the building at the invitation of President Henry J. Willingham.  In exchange for this accommodation, students at the college were allowed free access to the books and reference materials of the Southern Library.  The library was open to the public every Tuesday afternoon from 4 to 6 p.m.

1943 -The Florence Exchange Club – The Florence Exchange Club revived its program to promote the building of a new home for the library.  This effort was led by Dr. Henry W. Chaney, head of the local health department.  The Board of City Commissioners was approached with a request that a new library board be appointed.  A second Library Board was then appointed.  At this time the Florence/Lauderdale Public Library was organized, the Southern Library was dissolved and all of its books and assets were transferred to the new city and county public library board.

1945 -Florence Library – In August, near the end of World War II, a gift of $25,000 was made by Louis Rosenbaum to the Library Board for the purchase or construction of a suitable building to house the Florence Library.

1945 – The Florence Library – The library moved into a temporary space in the former restaurant in the Reeder Hotel on East Tennessee Street.

1945 – The Rosenbaum Gift To The Library Board In Florence – The Rosenbaum gift enabled the employment of a professional librarian, Miss Evelyn Peeler, from Salisbury, North Carolina.

October 1947 – Books For The Florence Library – The Tennessee Valley Authority transferred 9,000 volumes to the city of Florence for the library.  They also contracted to give $6,000 a year for three years to be used to help operate the local public library.

November 26, 1947 – The Contract To Build The New Florence/Lauderdale Public Library – The library was to be built on North Wood Avenue between Mobile and Tombigbee Streets.