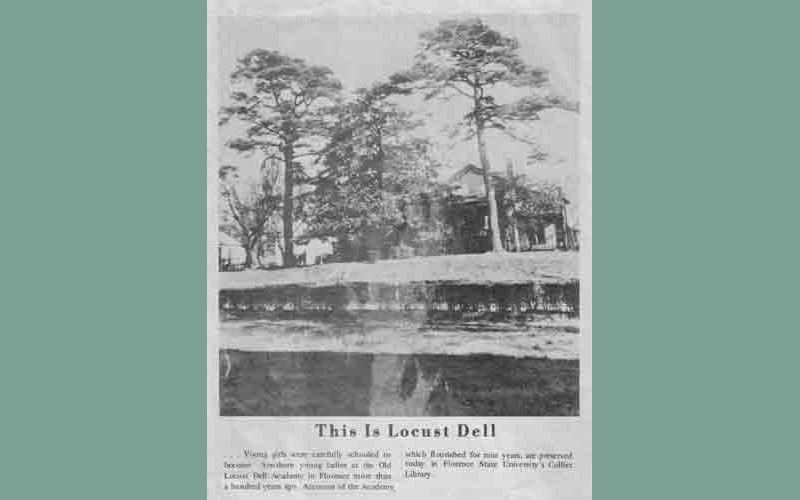 Following the founding of the City of Florence in March 1818, the first school was established on the John Coffee Plantation, Hickory Hill in 1820.  Land was set aside by the Cypress Land Company for educational institutions.   By 1850 Locust Hill Academy (1830), the Florence Academy for Young Gentlemen (1846) established by the Presbyterian Church, and the Florence Female Academy (1847)  have been established as well as a number of classes taught by private teachers.  LaGrange College is established by the Methodist as the first Chartered College in Alabama (1830).

December 1820 – Lorance School – General John Coffee and his neighbor, Dr. John Bedford, established Lorance School near what is now Cox Creek Parkway.  This is believed to have been this area’s first structured school.

1828 – Vigus School for Boys – “Professor Vigus” opens a school for boys in the building formerly occupied by Rev. Wall’s school.

1830 – Tinnon School – Professor Tinnon teaches at a school on the corner of Seminary and Pine Streets.

1830 – LaGrange College – Rev. Robert Paine is appointed President of the new college; he also is Professor of Moral Science and Belle Letters.  The college opens on January 11th, with seventy students and three faculty members.  The main building contains dormitory rooms, a chapel, the President’s office and two lecture halls.  Tuition is $10 per session.  On January 19th, the State legislature charters LaGrange making it the “First Chartered College in Alabama”.  The college is to be “purely literary and scientific”; no specific religious doctrine is to be promoted.

1833 – John Cox’s “Library” of books – A local preacher, John Cox, who lived on West Tuscaloosa Street, housed a collection of more than 96 volumes (books) at the time of his death in 1833. This picture is located in the scrapbooks compiled by the late Oscar D. Lewis. These books, which contain many interesting articles about this area, are in the local history and genealogy room of the Florence Lauderdale Public Library.  The date of publication and name of newspaper are not given.

1837 – Henderson School – Mrs. Henderson from Scotland is the teacher at the school on the Northeast corner of Wilson Park.

1837 – James School – Miss James from Philadelphia opens a school for very young children at the intersection of Pine Street and West Mobile Street.